In the last few months I’ve started hearing people complaining because of weird 1px thick horizontal lines appearing in the middle of their email when opened in Outlook 2016.

A couple of months ago a Mosaico user reported an issue against Mosaico’s Master template, Versafix-1.

So, I decided to investigate the issue and find out the problem, but I failed…

I spent at least a couple of days trying to simplify my email to isolate the issue, but I failed.

Maybe it is my abuse of CELLSPACING?

At first I thought I succeeded and found out the guilty code was the “cellspacing” attribute. I also created a minimal example showing the issue using simple tables with cellspacing. Here is the simplest HTML I’ve been able to write to reproduce the issue: 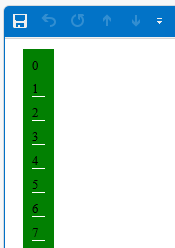 You can see the great Outlook 2016 rendering: note that the white line is not even in every <td>… one cell every ten or so is rendered fine:

So, once I found this I started rewriting my whole template to avoid using cellspacing, but I simply wasted more time because even without the cellspacing the issue was there!

Maybe it is something else in my HT-email-ML

Here is the simplest HTML not using cellspacing and showing that bad line of death.

Unfortunately Litmus preview for Outlook 2016 Windows is down right now so I can’t give you the link. Update: Here is the Builder project

In this case even the smallest change to this html will produce good output:

And what about Mailchimp templates?

So I started thinking something was wrong in my HT-email-ML as I didn’t find other people on the web talking about those [email protected]@cking lines in outlook 2016 in their emails, so there must be something in the way I code email. I then opened a Mailchimp account and created a template using their drag and drop editor. I took one template, changed the body background color to a dark grey and added some block. I sent it to Outlook 2016 and whoops, I obtained 2 thin dark lines appeared in my Outlook 2016.

Now I cannot give you a solution. I can tell you that the issue is reproducible: the same code produces the same lines. But you change something at the bottom of your email and you see lines appearing or disappearing at the top of the email.

As emerged from Litmus discussion, Microsoft on a Technet discussion on the same strange behaviour, informally states that “this is actually a known issue, and still under investigation in production group”.