In the last few years a lot of free to use email builders have been published on the web! This is a great news because creating a responsive email that works fine on most email clients is a real PITA.

Here we try to define a basic classification for email template builders, for their Business model and for their Architectural choices.

When you use a free tool it may help to understand what’s the plan to monetize it:

Being the only opensource product, Mosaico has a special position in this categorization: of course we hope to make some money by providing Commercial Support for Mosaico but we mainly opensourced it with the hope to create a community around it.

You will also find plenty of proprietary Email Editors built-in in the platform of most email marketing firms like Mailchimp, CampaignMonitor, BenchmarkEmail and many more.

“Template based” vs “Built-in” HTML structure

Template based html structure: Mosaico, Stamplia and Mailsalad let you compose and customize a “master template”. The result you can obtain heavily depends on the template you chose to work with.

Most editors belonging to this category publish a “template language” to let Email developers build their own “master template” and add some special declaration to their template so to allow the editor to customize it. Template developers will be able to decide which blocks can be used and which properties can be changed.

Stamplia and MailSalad have a simpler template language than Mosaico: this means that it is easier to create templates for Stamplia or MailSalad but the resulting template will be less customizable. Mosaico gives much more power (and responsibilities) to template developers.

Built-in html structure: many editors prefer to use an “hardcoded” html structure. This usually means that you can’t use customized templates but only some “layout” provided by the editor itself.

Responsizer, BeeFree, EdmDesigner and FreeEmailEditor fall in this group. This approach usually make it easier to create a powerful editor with many customization options, but this “feature” also means that once you hit that limit you have no way to get over it. 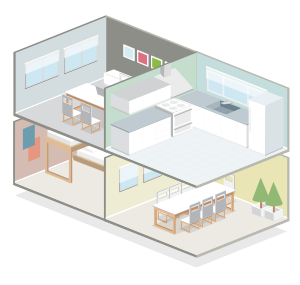 One of the key point of the architectural design of an email builder is how to let the user compose the email itself, what kind of blocks or contents he can brings in and how he’s allowed to combine them.

Most editors let you build your email like building an apartment block: one floor at a time. We identified three strategies one can follow, from the simplest -and less flexible- to the most complex -and most flexible:

Most email marketing firms provide their own proprietary email builders that can be classified using the above criteria. Some of them provide both “template defined email” and “editor defined email” editors (e.g: MailChimp and MailerLite have both kind of editors). They probably found that there is not one single right way to do this.