Mailtrain defines itself as “Self Hosted Newsletter App Built on Top of Nodemailer”: it’s an open source project, born in 2016, meant to be an alternative to commercial ESP to who prefer a self hosted service, with complete control on the software beneath. 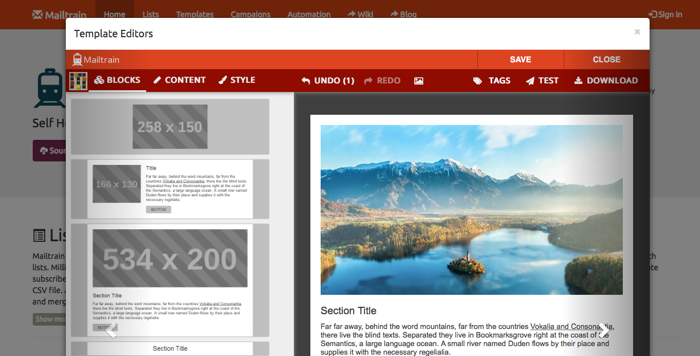 Mailtrain has grown a lot in the past year, and has a fairly huge fanbase (over 1.300 stars on GitHub): its ambitious roadmap includes not only the basic newsletter send features (list management, custom fields, list segmentation, bounce analysis…) but also a number of advanced tools, like RSS campaigns, GPG Encryption, Automation.

As soon as the project launched we suggested to Andris Reinman, the creator of Mailtrain, that Mosaico was a perfect match for MailTrain and Andris put Mosaico as possible integration in official Mailtrain roadmap published on 8 April 2016.

An year later Roger Witzig contributed the code to let Mailtrain support external email editing tools and added support for both Mosaico editor and the wonderful GrapesJS(*) editor inside Mailtrain.

A few days ago we received the Mailtrain Announcement newsletter and, guess what? it was beautiful, fully responsive, sent by Mailtrain itself and…. designed with Mosaico.

Mailtrain is a young project, but is growing fast so we are happy and proud to be part of this project. Starting from v1.23.0 release it includes Mosaico: test it and let us know what’s your opinion.